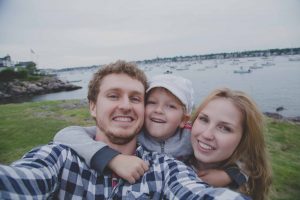 Hi! We are Mark and Natalia Minskiy and our son Daniel, we started Questime.

Mark was the best graduate of his class from Moscow State University. Natalia graduated from Russian State University of Cinematography and finished screenwriting courses in California. Daniel learned to read at the age of three, and now at seven he’s helping his parents write intriguing stories and taking on the world.

We started our company in Russia in 2013, and from then on we held over 7000 games directed towards many age groups and personalities. The group’s size can vary from 6 to 200 people. Not a single game has been completely identical.

Theme Party Game or Immersive Performance is an interactive and engaging story, in which the first scene is written. Every player gets to play the main character in the plot. How will the adventure end: who will achieve their desires, and who will end up behind bars – the players will decide.

Why did we decide to designate our lives to theme party games?

We know, the longing for adventure, for vibrant emotion, new friends, and new sentiments with old friends. Sometimes we want to open a door to a new world, leave our problems behind us and… enjoy an experience to its fullest.

We created just that experience, which satisfies your yearning. 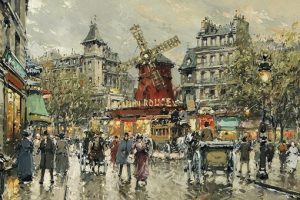 How we create the plot:

Every plot takes 6-12 months to create. We study an epoch by reading books and articles (from scientific to artistic origin), watching movies, going to museums and expositions (for example, after going to the Chat Noir Museum in Paris, we decided to write the “Black Cat Cabaret”). Since we live culturally rich lives, ideas for enveloping themes will come in abundance for generations.

The initial idea and materials for the game are an important, but a small contribution to the work required to create a theme. Its very important to come up with an enticing game mechanic so that it’s different from the way other themes play out, so every game that we create is versatile. The testing stage of every theme is also very principal. The roles must be balanced. Every player has to be interested in the character he/she is assigned, so the game is able to progress. He/she can reach their objectives in a variety of ways so the other characters are interested in the role. To write a balanced theme that is fascinating to an array of players is, in a way, harder than writing a book.

We designate special attention to the design of every game. Our theme parties invoke joy by how emotional and aesthetic the plot is. The text in each booklet should be presented beautifully and clearly. The familiar and recognizable characteristics of a specific epoch help with that process. For the plot “Black Cat Cabaret” we used paintings by French artists from the end of the 19th to the beginning of the 20th century. The “Doublebottom House” is a world set in victorian England teeming with references to famous detective novels & a little steampunk ))) In the booklets for the “Wizard’s Choice” plot, you will find beautifully designed avatars specific to each character.

What is important to us? 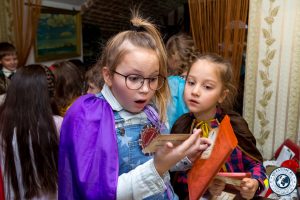 TELLING THE STORY. You cannot overestimate the value of a good story. Especially when you are playing the hero, and not the passive audience. Our plots never include extra or insignificant roles. Every line is carefully balanced and thought through to make sure everyone is contributing to the conclusion of a theme.

THROW A PARTY. At the center of every one of our plots, lies a unique story. We don’t want the topic of conversation to be purely about the murder. It’s true that everyone wants to play the role of the detective, but life is much richer than that. The golden rule, regarding our plots from Questime, is that the players and Game Masters must enjoy playing the game.

CREATING THE ATMOSPHERE. A theme, is a uniquely made up world. But every time we play the game, the story comes alive through every participant. You mustn’t just play the game, you have to live it. The experience is carefully calculated to intrigue the players, as they follow the game mechanics in their booklet. For example, in the “Black Cat Cabaret”, to get something 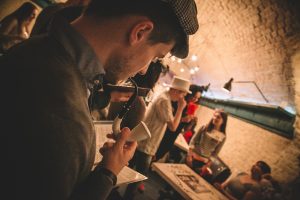 from another player, you have to insist on them having a drink of absinthe(as a prop). In the “Double Bottom House” you cannot start a conversation without bringing up the weather or Queen Victoria. For every theme we choose the appropriate music to go with the game. We also derive costumes that fit the plot. No matter which themed game you’re playing, you will always receive a letter. The letter will consist of information regarding the game, as well as an interesting way to get in character. We bring accessories to the world of the theme: necklets, fancy hats, hand fans, magical cloaks and more!

In March 2017, we moved to the United States to show our theme party games to the community. We are open to all offers of partnership. We actively support volunteer events and educational programs in schools & Universities.

In Russia we have many franchise partnerships all over the country. In US we work in Massachusetts and New York City, and would be happy find partners in other states as well.